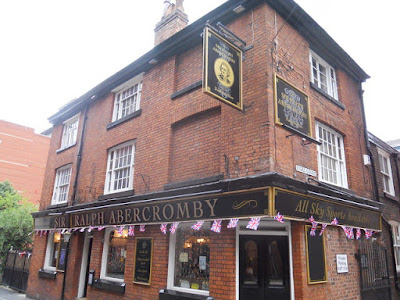 the anniversary of Peterloo, it’s Sky TV and Friday beer,

punters and three Common Singers whiling away the time,

surprised their audience was so small on this, 200 years.

Just thirty wet umbrellas round the back of a big red brick hotel.

Rebel Karaoke dribbles on. Manchester Central’s anything but

and the expected many celebrants seem few. Trams rumble on

through the rain, through St Peter’s square beneath the crossed keys

standing where a steeple would have been, now a yellowy stone

pimple on a shopping, eating, drinking street parade. Even the bees,

the flowers, the names in the Library entrance trodden on, regardless.

2
Some wax-jacket men, flat-capped, draw near the famous mural

and appear to pause a mo, reverential, ponder at the ledge below

(is it original?) and some small objects there, as in a museum, or a church.

Hands raised, they reach out… to light a candle? In remembrance? Hold

a start of weekend vigil for the Monday Massacre above? The painting

spreads a moment out over their heads and ale glasses, an instant just

before the crowd all lost their hats, their shoes, cravats and other articles

of clothing, not to mention sense of self as able to resist, left in heaps

around the corner, on St Peter’s Field, rushing from the Yeomanry’s assault.

Squint your eyes, the figures at the foot seem revelers - hands in the air! -

until you see they’re holding standards (Liberty or Death) children and heads,

utter despair and shock their fayre. Then a man, with his free hand, picks up

Over the the toilet door, the writing’s on the wall, in gold: #forthemanynotthefew .