Of Peterloo, by Sophie Parkes 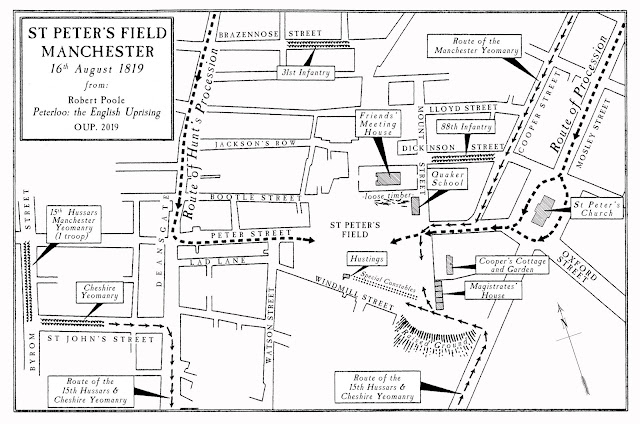 The site of the Peterloo Massacre, courtesy of Manchester Histories.

Of sleep smeared eyes and tired feet.
Of forgotten breath and raised heads and whispers behind cupped hands.
Of blistered feet and shaded eyes and fat droplets of sweat caught by eyebrows and eyelashes.
Of calves strained by tiptoes. Of shuffles and sniggers and we can’t hear you!
Of lads talking loudly and lasses shushing them.
Of younger ones complaining of heat and boredom and lack of bread and boredom.
Of mothers telling them to hush and stand up straight and don’t be so ungrateful, you don’t get to go to Manchester every day.
Of elbows in ribs. Of shoulders knocked and bodies jostled. Of apologies and tuts and hands finding others to draw bodies closer.
Of sighs of relief when you’ve never seen a crowd this big, you thought you’d lost him forever and you’d never find the road home let alone the full ten miles.
Of messages passed back.
Of I missed that bit and say it again and what was it? and sighs when it’s repeated for the hundredth time.
Of toes tapping and thoughts of home time.
Of empty mills and empty bellies.
Of louder then and louder still. Of fists in air and fists on chests.
Of women, too, and children.
Of roars then and cheers more.
Of pushing, panting. Of pleas.
Of shoving, shaking, screams.

Toes meeting knees. Of arms.
What? Where?
Of charging.
Arms at necks, around necks. Arms at backs of heads.
Heaving now, and shunting.
Piercing, metal on metal.
Hands grabbing. Hands.
Fingers pinching.
Hats lifted from heads.
And feet. Feet in backs of knees.
Tearing shirts and turning.
Where? Where?
Shrieking.
And there are horses. Smell them: hay, sweet, damp.
And metal again, that metal smell.
Hear them: horses scream like children, like women.
Like men cast down with bayonets.
Dull: hoofbeats and bodies.

Of a ginnel.
Of hands pulling, hands pulling at you in the ginnel.
Of tears in your Sunday shirt.
Of the surprising damp of a wall, of a back pressed against it.
Of breathing fast and loud. As loud as the cries that continue, that continue from your own mouth.
Of hands about your hand and head and there, there.
Of gunshots.
Of heartbeats that sound like gunshots, as regular and as startling.
Of wordless mouths and wet cheeks.
Of eyes bloodshot and wide.
Of breathing, of panting.
Of breath.
Of breath.