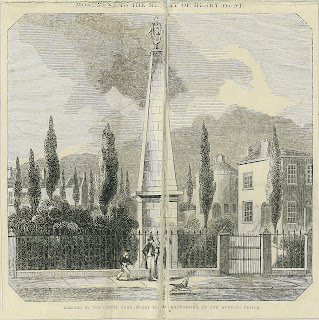 John Knight, a worthy Mossley man
Both principled and gifted
Believed that common man should be
From poverty uplifted.

A weaver, then a teacher
And a writer of repute
A man of fearless self-belief
Fuelling conflict and dispute.

Supported by his good wife, Liz
His aim 'cross town and county
For every man to be allowed
A share in nature's bounty.

The Corn Laws brought starvation
To the poor and down at heel
But Parliament's Rotten Boroughs
listened not to their appeal.

In August 1819
In polished boots and starch
Thousands gathered in local towns
To Manchester they'd march.

John led the folks from Oldham
All smiles and great good cheer
On their best behaviour
No smut, no fights, no beer.

In Peter's Fields sat Henry Hunt
with John Knight at his side
Flanked by Women's groups in white
Infused with hope and pride.

The Yeomanry – a local joke
Decked out in tight white breeches
Their only aim – to stop the poor
From sharing in life's riches.

The cloudless sky, a piercing blue
The sun was shining bright
Directly on the grassy sward
Gored red by fall of night.

Shot by muskets, sabred and stabbed
Women and children too,
Trampled by the horses
At bloody Peterloo.

John lived another 19 years
Still proving his great worth
Worked with unions and poor relief
Then was laid in earth.

Graham's words have since been set to music and performed by Mossley-based singer-songwriter, Martin Stimpson.